There’s a photo in my father’s collection that makes me look again, every time. It’s a view through a remnant of an Egyptian building, a stone wall, to a mosque a short distance away. 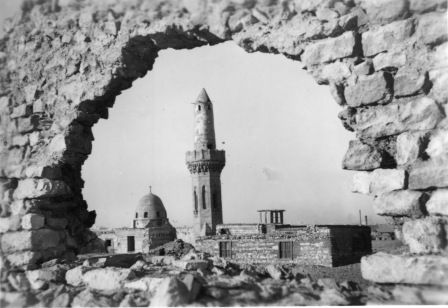 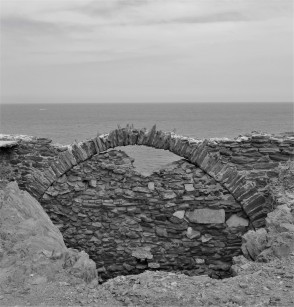 To compare it with one I took with a digital camera, a small Sony I had in 2013 (not as good as 2022 cameras but better than a 1940s camera), I’ve chosen one of the arched embrasures constructed on the cliff edge near Port-Vendres in France (there are a few). I was struck by the similar elements, the arch, the stones, the connection to the Second World War.

The French stone wall has an unnecessarily beautiful arch defining a space through which to point a cannon, and two thinner holes below for rifles, in a position that makes them look like eyes, particularly in my original colour photo where they show the blue sea beyond. In the older photo, the shaded sides of the stone frame and the buildings beyond contrast well with the harshly lit walls under a clear hot sky, giving the picture drama and life. I prefer this older pic, perhaps because it’s taken at an angle, not straight through the hole in the wall. I can imagine standing there at that window in the desert heat.

Zooming in on the stones in the newer image reveals not a lot of difference in the clarity of the two photos. The shape of each brick in the foreground of the older image is quite clear, with the image only blurred about the edges where the modern image is sharp even at the sides.

In case you’re wondering about the blue eyes in the defensive structure, here’s the colour shot: