In the album my father brought home from the Middle East in 1942 there are several photos of graves and cemeteries. The one I’m posting here is quite moving. It seems to be an impromptu grave made for a pilot in the north African desert where Australians were serving. I’m comparing it with a photo I took in 2014 when I was doing some family tree research. Some of my ancestors were pioneers in western Queensland and are buried in Dalby, in a cemetery which looks fairly abandoned. This neglected family plot doesn’t belong to my relatives but their graves are nearby. 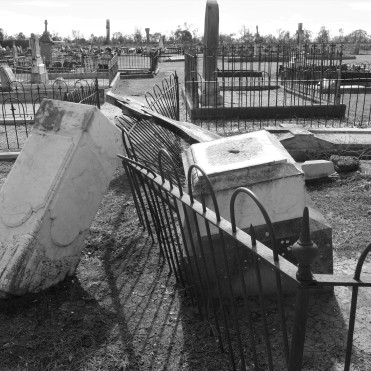 I’ve converted my photo to black and white to compare it with the photo from World War Two. The older one is a bit fuzzy but clear enough that we can make out the cross, the stones on the grave, the propeller, crash debris, and stubbly desert plants. But cameras have come a long way, as we can see in the newer photo if we zoom in, using the WordPress blog feature of clicking on the photo, then the ‘i’ information symbol in the circle, then ‘View full size’, then the plus sign.

The detail that’s revealed is surprising. For example, the headstone in the top left of my photo becomes completely legible. (At least, that’s what it’s like on my desktop monitor. I hope it’s the same for those looking at a phone screen.) But for the old photo, zooming in further only makes it even less distinct. The stones on the grave are recognisable as stones, but blown up they look more like black, white and grey forms. Perhaps a positive about old photos is that details are not too visible in scenes of destruction like this. We have to use our imagination because not all the information is there, unlike today’s graphic news images that require a newsreader’s warning before they’re shown on our screens.

N.B. My father wrote under the photo in his album: ‘Grave Flt Lt Smith’. I haven’t been able to find out more information.