Once I was sitting near a café counter where I could take a close photo of the stacks of plates and cups waiting to be used. The resulting picture reminded me of one taken in about 1941 in North Africa, probably Egypt, which I found in my father’s WW2 album. The man in the turban has always fascinated me, a kitchen worker who had to carry a cumbersome load of plates, with more waiting behind him, and who stopped a moment for an Australian soldier to take his photo. 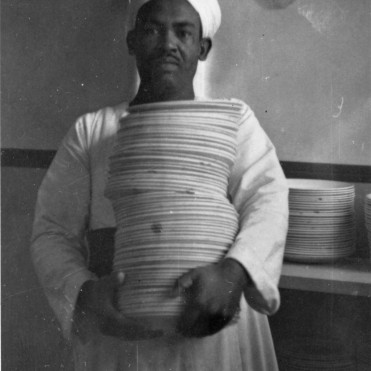 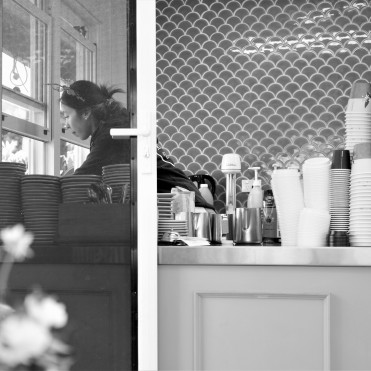 I like the similarities in the two images, an appealing repetition of the pattern formed by the plate stacks, even in the photo on the left in spite of its age. In its background is the repetition of plates on shelves, and in the new photo it appears in the stacked plates and cups and the shell pattern on the wall. Here, the edges of all these plates and cups and tiles give the whole image a sharp neatness, but though the visible edges of plates in the old one are not sharp, still each plate can be counted, even those in the dimness behind the man. When combined with the sheer number of plates, it gives the picture a story.

I go to cafés often, and thought I’d try to snap a waiter or kitchen hand carrying a huge stack of plates. But I either wasn’t in the right kind of venues, or kitchen workers no longer have to handle so many plates at once. There might even be a rule against it.